I've been showing off the conversions from my Chibi Kingdom Death set for a while now- but I realize that I've neglected to post up good pictures of the survivors that I've made. Here is a group of them.

Since this is an ongoing project, I'll be continuously making more, so there will never be a final "all of them together" post. The conversions range between custom basing and extensive resculpting. 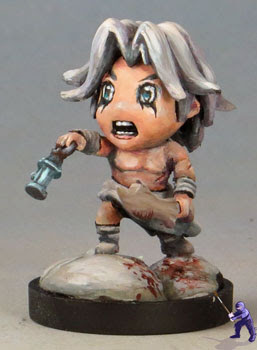 Alistair uses the head from Sebastian Cross- I had an extra since I used Cross' body for my Kingsman. His body comes from a Mistmourn Shaman, with his skirt sculpted on, and his weapons come from Kingdom Death sprues. I really liked the idea of painting his eyes to match the prologue, even though he's clearly a Lantern Year 2+ survivor (since he's not barefoot, and has a bone blade). 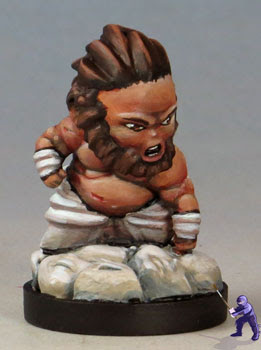 For Zachary, I wanted a survivor that was a little more muscular than scrawny Alistair, so I used the body from Yokozuna (I still have the head for making a Sun Priest later). 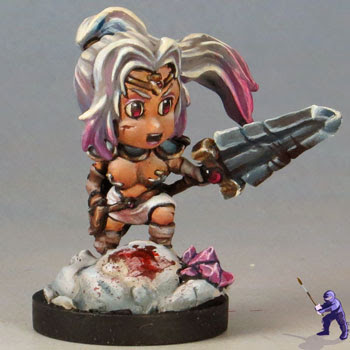 Rail Raiders Infinite's Rhinestone took me by surprise. She just looked perfect for Kingdom Death, and just needed a color scheme that would work with the set. 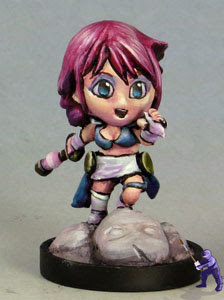 It seemed wrong not to make a version of the crossover Candy and Cola for my Chibi Kingdom Death set. The head comes from Candy, and I found the best body to start from was a Shrine Ninja Kunoichi. Much of her skirt is sculpted on. I would have put Cola on her skirt, but I got to thinking that he should be his own survivor. I haven't finished his conversion yet, but I'll make sure to share it. 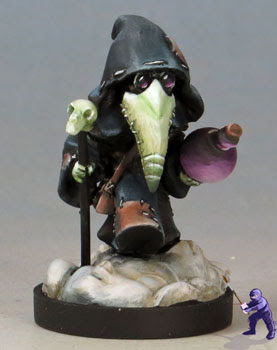 The Plague Doctor doesn't seem like the most natural mini to make for Chibi Kingdom Death. I was looking through my bits box one day, and I found an old Rackham goblin, and I could see all of the conversion that I'd need to make. For his color scheme, I decided to make a tribute to the Shovel Knight villain/hero Plague Knight. I'll probably do a couple other Shovel Knight characters as well (Specter Knight would make a good survivor as well). 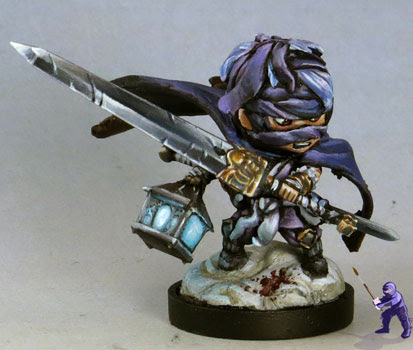 I've posted him before, but here is my first False Messenger- the Messenger of Humanity. Until they have their own rules, they're playing as survivors. He was made from a Yamazaru Ninja. I did quite a few things to him- sculpted his cape and head wrap, swapped out his weapons, and gave him a sheathed twilight sword on his back. 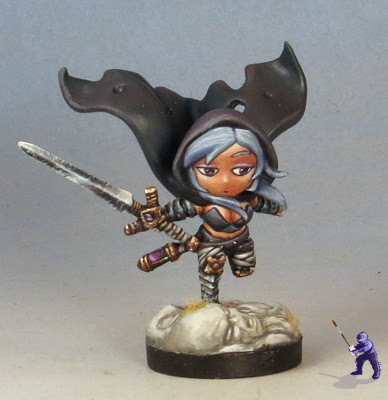 And here's the girl who started it all. No changes to her except for the chibi face base. I bought the resin resculpt of her as well, and I have to say that it is a clearly superior sculpt and cast. Honestly, already having a twilight knight to fill the role has kept me from painting up a second one, so I'm considering what sort of twilight knights I could convert her into. At the moment, I'm oscillating between making her a cat for the Neko Twilight Knight or giving her a costume as the Halloween Twilight Knight.
Posted by Drew Olds at 9:27 AM 2 comments:

The dragon king is a very majestic mini. Like most Kingdom Death minis, he's exquisitely detailed, and simply oozes character. In addition, he's also large enough that it is hard to get a photograph of him that keeps everything in focus.

I was very happy to have a chance to paint him up. I got to do a lava face base for him (something that I'll probably do something like this on my own Dragon King when I get around to painting him up). 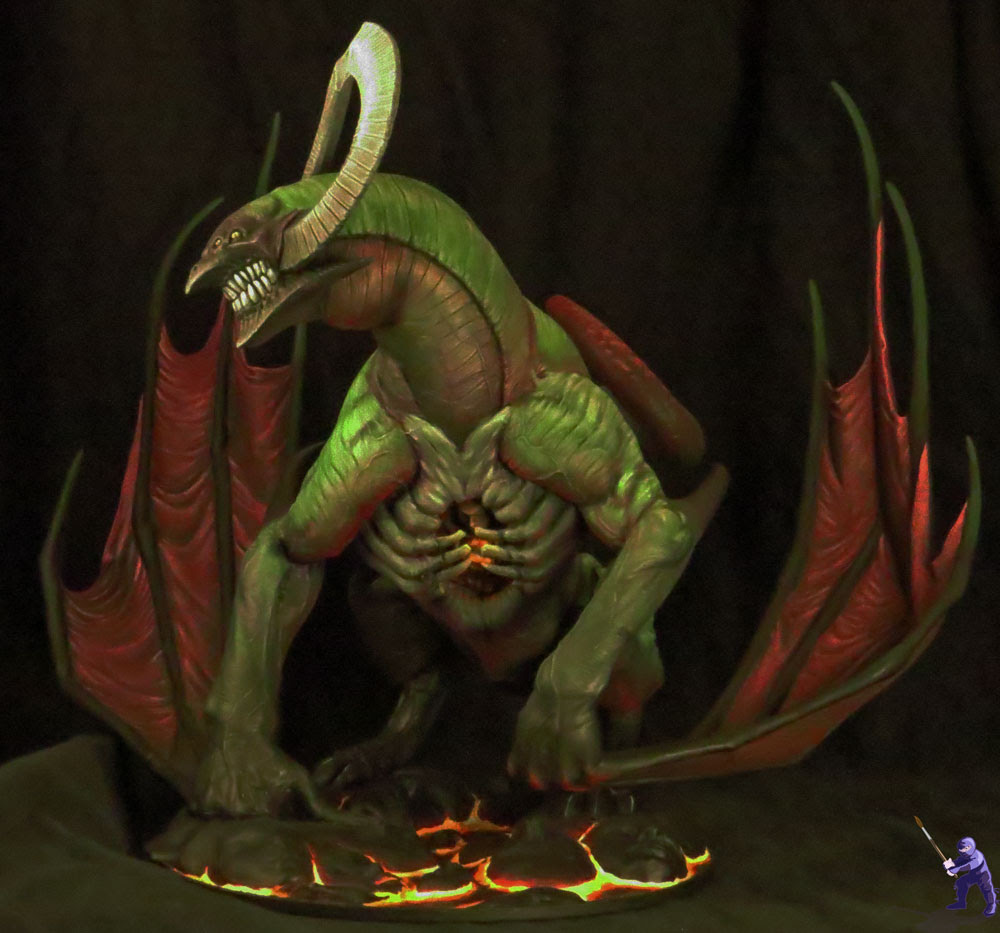 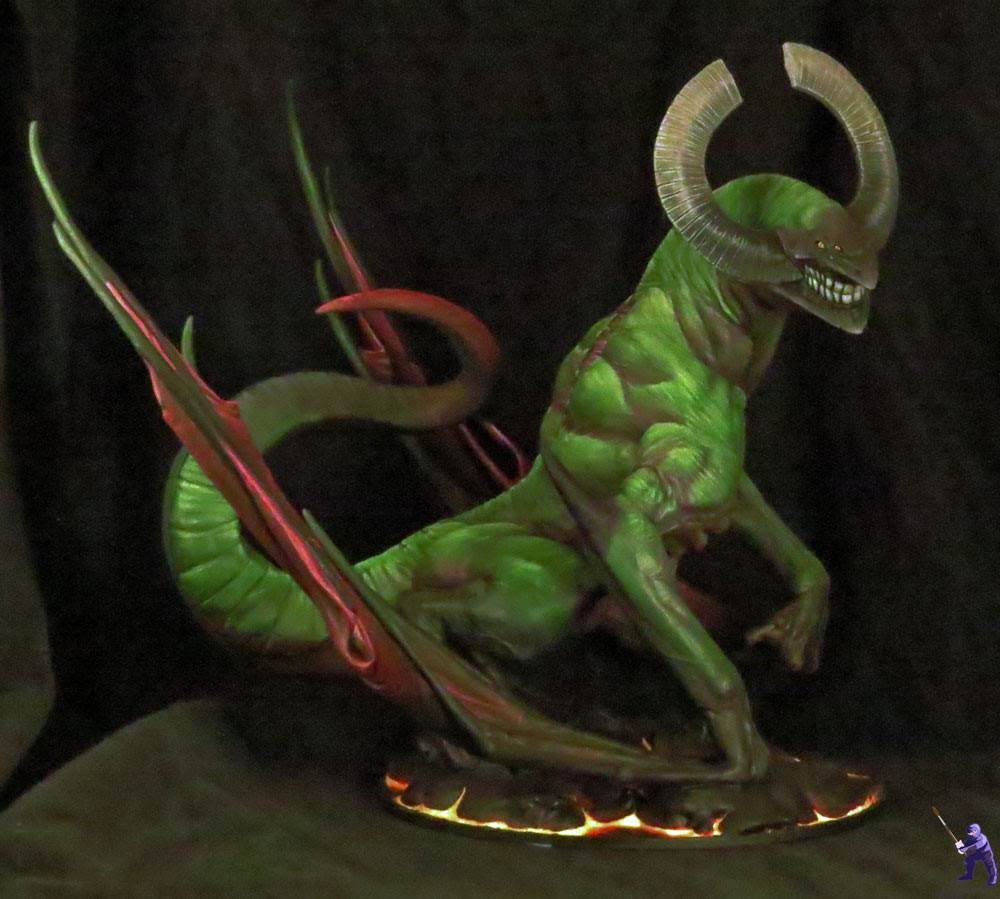