The back to back couples remain the most popular of the cake toppers that I make, and the couples I work with come up with some very creative things for their weaponry.

Here are a few couples with some rather powerful weapon loadouts. 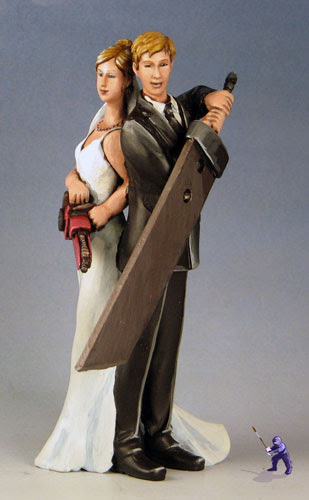 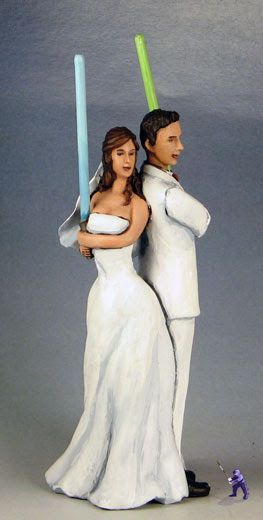 One thing I've learned throughout the years is that there are very few things in life that cannot be improved by adding ninjas.

Here are three couples who have, evidently, learned this same lesson. 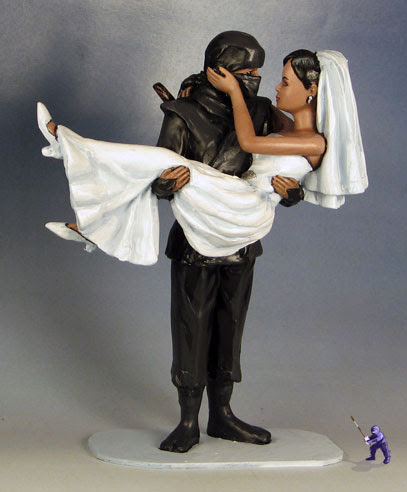 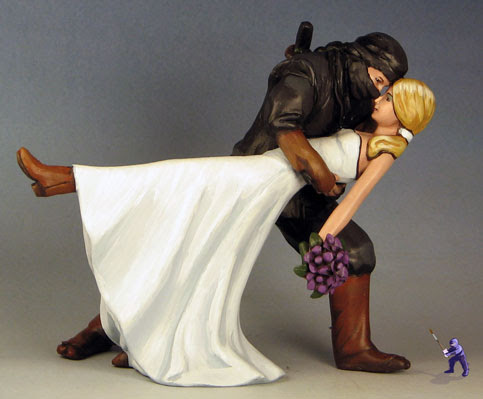 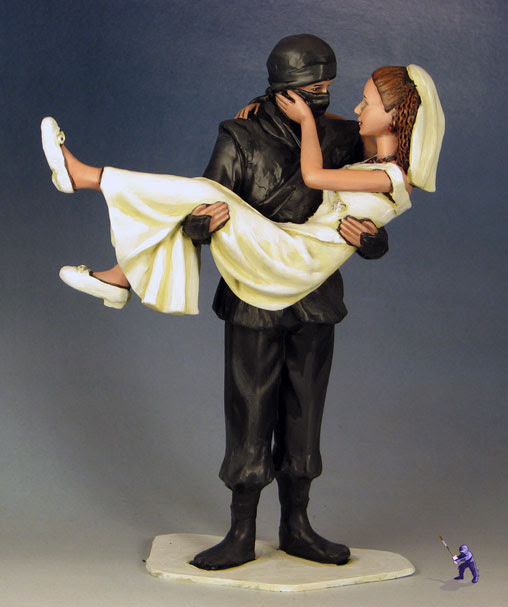 Here is my rendition of the evil elf (also dark hero) for Super Dungeon Explore. Chibis like this are loads of fun to paint.

My concept for her color scheme was to make her a Nyss.

I used Cylena Raefyll's colors as a starting point, and went from there. Overall, I think she looks good in Nyss colors. 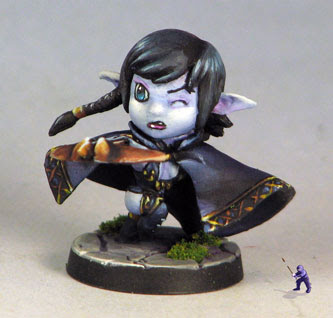 I've been making zombie survivor cake toppers for brides and grooms for a while now, and somehow I feel that there's a lot to be said about the weapons they choose.

Firstly, I'd like to thank The Walking Dead for pointing out to us just how useful a crossbow is when fighting zombies. Sure, the shotgun or chainsaw will kill loads of them, but it's a double edged sword (erm, a double edged chainsaw?) because you're likely to draw the attention of far more than you kill.
But a crossbow- that's silent. And there's even a decent chance of recovering precious ammo. 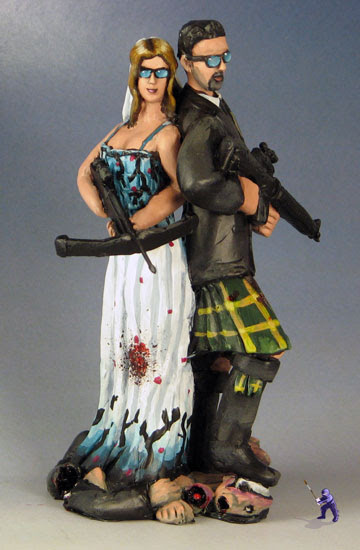 (of course, that's all for nought if you hang around with a guy who's all the time firing his assault rifle).

Also, I feel that The Hunger Games has taught us that a traditional bow is actually a pretty badass weapon, and has a place in the modern arsenal. And with many of the advantages of the crossbow. 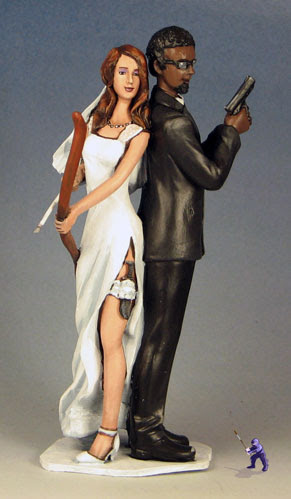 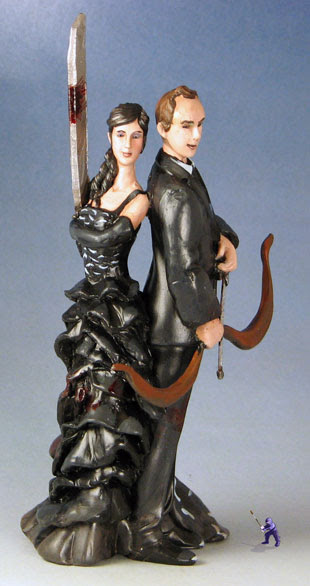 Of course, many of the couples I make toppers for are far more interested in battling orcs than zombies, and a good number of the bows and crossbows I make aren't considering those advantages vs. firearms. Some of them might even be enchanted. 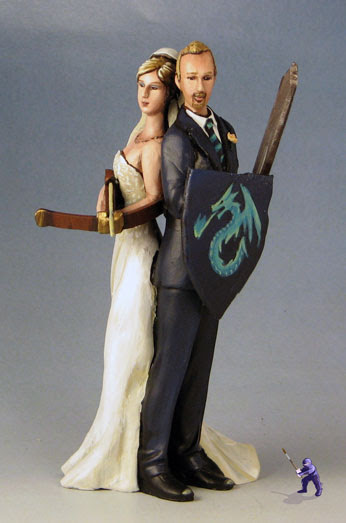 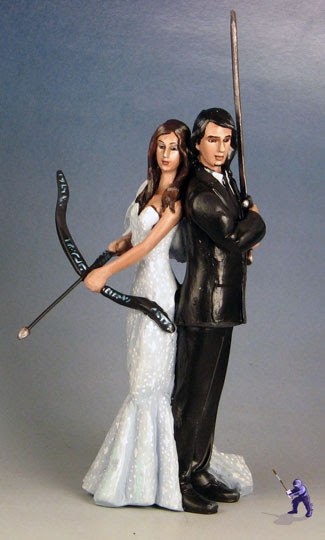 This is an adventuring party I created for the Iron Kingdoms RPG. Our group has been playing for years, but this is the first time we've really gotten into playing Menites (there's an issue of them not playing well with non-humans).

Our group started their own order of knights who like to emphasize that "there's a place for all at the feet of Menoth." In role playing terms, it has been a lot of fun- they're quite condescending to the non-humans, but at the same time, they try to convert the dirty children of the Wurm rather than simply killing them all off.

These minis all started life as Reaper Bones minis, and have had varying amounts of conversion done to them.

The Warcaster/Priest had the most done to him. He started life as a Pathfinder Iconic Wizard.  He likes to argue about the meaning of the Cannon of True Law, and is the group's main preacher. 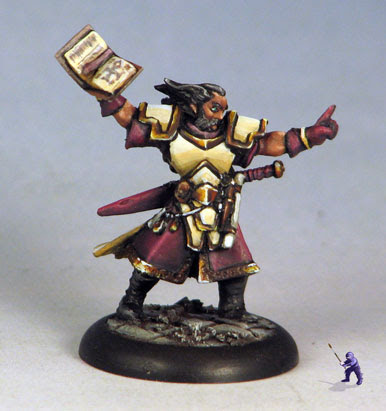 Out Paladin/Man at Arms needed no alteration before he could be fielded. I simply removed the base from the mini and mounted him onto some more Iron Kingdoms appropriate cobble stone. 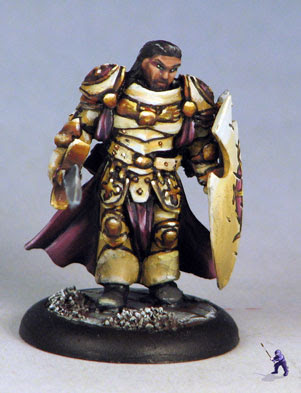 Our Cutthroat/Acolyte of the Order of the Fist also did not need very much conversion. I cut her hand off and reposed it so that she's provoking an enemy rather than throwing something or casting a spell. 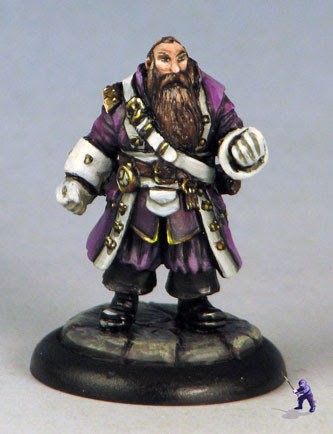 The last mini here is a Spy who generally impersonates a local Thane (ordic aristocracy). I altered the mini to remove the cutlass in his hand, but again, there wasn't a whole lot of work that needed to be done. 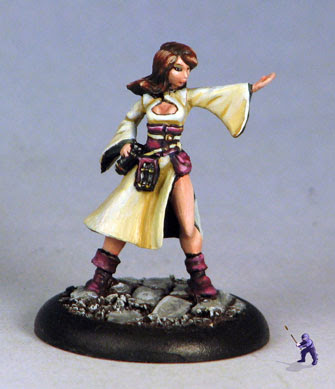