Sedition Wars up on Kickstarter

For those of you who do not already know, Studio McVey is responsible for arguably the finest miniatures available anywhere. Just take a look at their Limited Edition Resins line, and you'll see some of the very best work by some of the very best sculptors in the industry (like Kev White, Yannick Hannebo and Jaques Alexander Gillois). And the concepts are always so original too (my favorite is Ruby, the velociraptor riding cowgirl).

They are currently branching out and creating a science fiction board game featuring nano-virus zombie-mutants fighting against the desperate human soldiers. Of course, the sculpts we've seen for this have all been excellent (and at least most are Kev White pieces).

They're funding the production run through Kickstarter and publishing the game with Cool Mini or Not, and it looks like they're keeping the bang for your buck ideology that Super Dungeon established.

The rewards look pretty nice so far (you could simply use it to pre-order the game, or to get other goodies) and it is currently half way to its goal with more than a month left.

And if you have quite a bit of money for this, you could get yourself a full set painted by Mike and Ali McVey.  For $3,000, it is actually a pretty good deal, all things considered.

I paint a lot of minis, and most of them are troopers for one game or another. That's not really surprising, because in most games you'll have a few characters and a lot of grunts.

For different factions and different games, the fluff changes as to just how unified a force should look. Everything from Warhammer 40,000's codex chapters with their matching color coded shoulder pads and helmets, to Malifaux's loose affiliations of mercenaries and scum. Sometimes you paint all of the troopers the same, and other times you pick colors or styles that tie the troopers together.

My wife and I decided that for our Super Dungeon Explore set, we weren't going to tie the minis together in usual ways. Rather, the minis were going to tie together stylistically: each and every Kobold will be a different color, but they will all be painted using black lining and color book-ending.

That reminds me that I'll need to do a write up on the bookending with a little show and tell. It is a technique that I learned that helps make minis look brighter. Here are the first three finished Kobolds. If you know just how bottomless the pile of Super Dungeon minions is, you'll know there's more on the way. 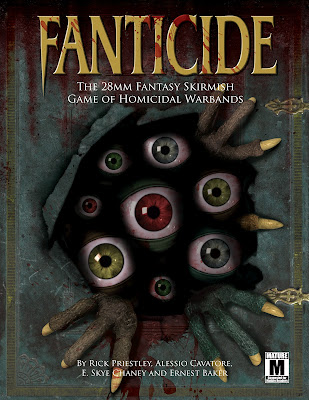 Ok, Alien Dungeon isn't a company that has made much of a splash for itself. You probably haven't heard of them. And the name Fanticide doesn't mean much to anyone right now. Honestly, I'm pretty sure it isn't even a word. But the names Rick Priestly, Andy Chambers, Earnest Baker and Alessio Cavatore are well known among people who have played Games Workshop games over the years. Rick Priestly is the man who made Warhammer what it is, and more recently is responsible for the award winning Hail Caesar historical rules set (and Black Powder too). Andy Chambers was responsible for some of Warhammer 40,000's best years and updates, and had a big hand in Necromunda. More recently, he is the lead designer for the science fiction World War II game Dust Warfare. Alessio Cavatore designed some great rules for GW's Lord of the Rings line (like making Tom Bombadil somehow work in a miniatures game without breaking the fluff). He is the lead designer for Mantic Games' Kings of War. Ernest Baker- there's a name I didn't know before now. He was a general manager of North American sales for Games Workshop also, and is now running Robot Peanut Studios. I'm sure we'll be hearing more from them in the future. So, what do you get when you put all of these people together? Well, apparently, it involves flying monkeys in a place called Nowhere. 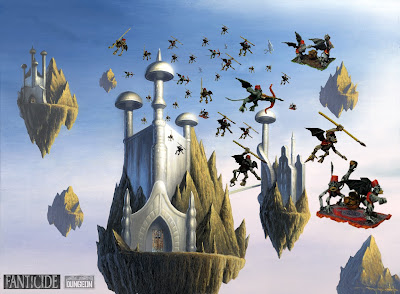 Really, I'm curious to see how all of the rules and world look in the end. It sounds like they'll have a number of interesting new rules, including event cards and rules to design your own units (to include miniatures from other ranges). Right now, I'm keeping my eye on this one.
Posted by Drew Olds at 10:11 AM No comments: