Here's another piece that I painted for Gencon's competition. Last year, I got to meet with sculptor Jeff Grace (who was working on a cool mini for Dark Sword at the time). We talked a little, and got on the subject of Star Wars, and how to turn his current sculpt into a Sith (we did consider that she could have been a jedi, but she wanted to be more evil than that).

We also discussed how this is true of a lot of his sculpts for Dark Sword, and how awesome it would be if someone were to create a diorama of a lightsaber fight between a Sith and Jedi using his sculpts.

Naturally, I had to agree that this diorama needed to exist. I'm not totally sure that he meant it as a personal challenge, but I couldn't just leave an idea this awesome on the table.

So, a year and many hours of converting and painting later, we have these dueling jedi (both created from Jeff Grace sculpts for Dark Sword's Visions in Fantasy line).

I've done quite a bit of OSL before, but in this case I found it was quite a bit more complex than usual. The three light sources in three different colors did give me a bit of a headache at times. I have to thank Janci's criticism for letting me know when and how it wasn't working so that I could get the light just right. 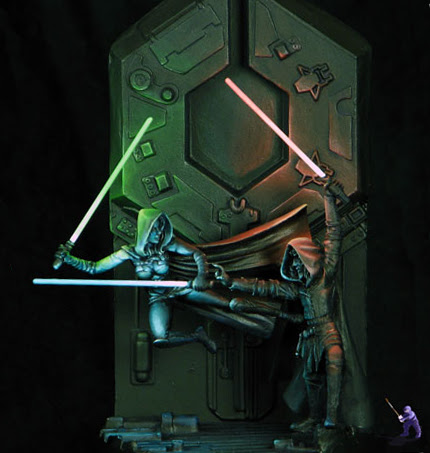 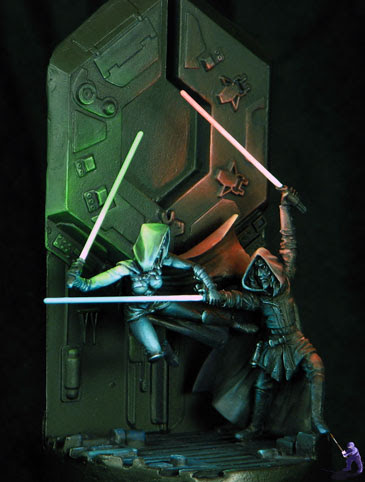 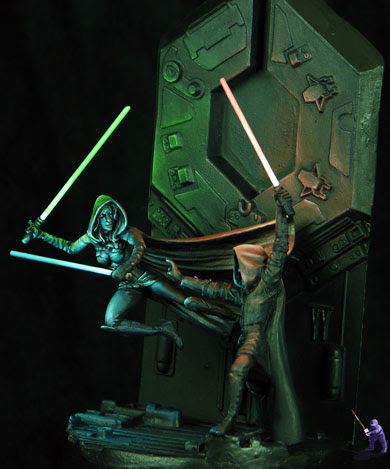 I'm back from Gencon, and it was quite a cool year. I'll need a number of updates to talk about all of it, but here's something to kick it off.

This year, I put a lot of effort into getting some good entries out for Gencon's Masterclass painting competition- especially for my Dark Sword entry (I've been eyeing those big trophies Darksword hands out to their winners for a long time).

This year, I got to bring home their third place trophy (in front of me in the Dark Sword Competition were Michael Proctor and Jessica Rich).

And in the single figure category, I placed second to Marike Reimer, and actually beat Jessica's entry (one of the judges told me that it came down to story telling against technical quality, so the different judges and criteria really mattered).

Anyway, I'm very happy to have placed above or on level with so many of my heroes. Anyway, enough about that. Here is the entry: 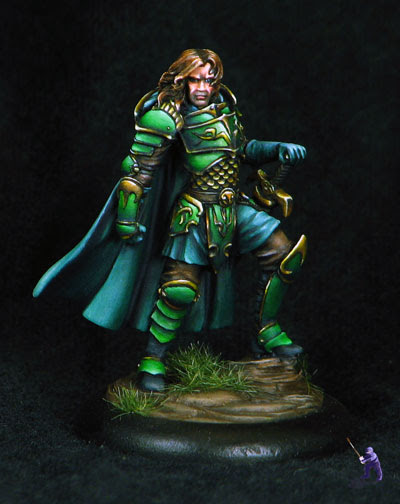 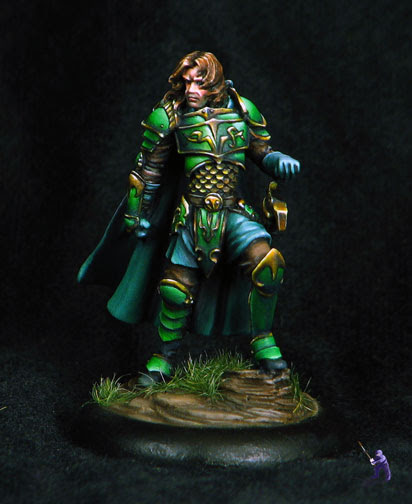 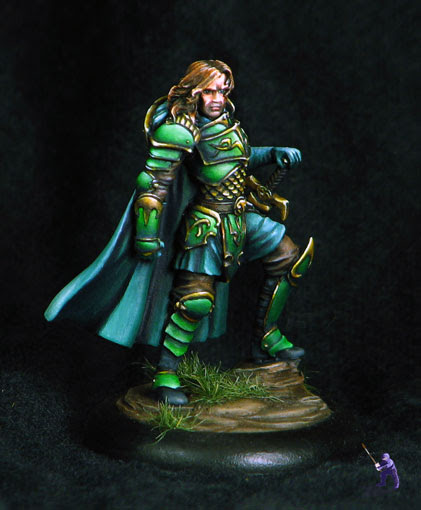 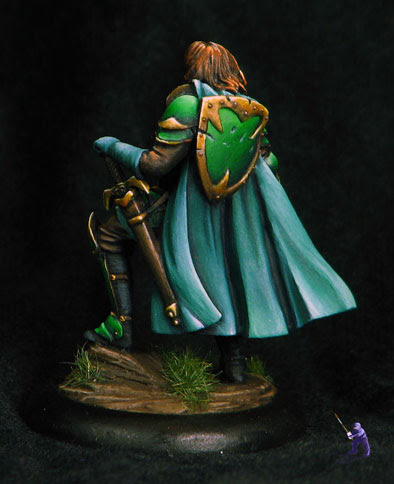 This has been one of the most popular minis to come out of Reaper's first Bones Kickstarter. I must admit, the idea of a steampunk robot dragon definitely has its appeal, and the combined efforts of Julie Guthrie and Bob Ridolfi definitely pulled it off. I was super happy when a client requested him.

There are tons of ways to compose this mini (you could pick out the various plates in a lot of different ways). I went with a NMM gold and silver scheme- keeping the golds in centers of interest where the saturation will help them stand out.

Here is the finished mini. 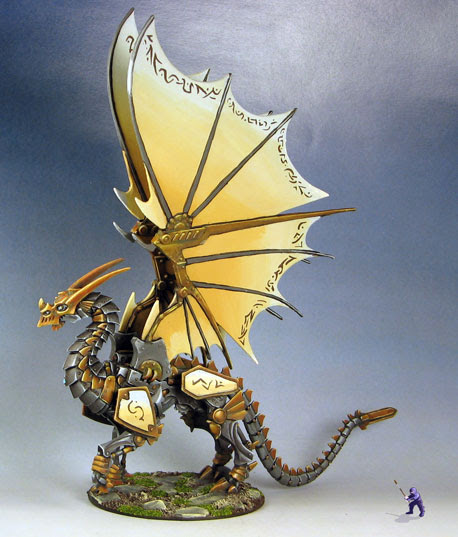 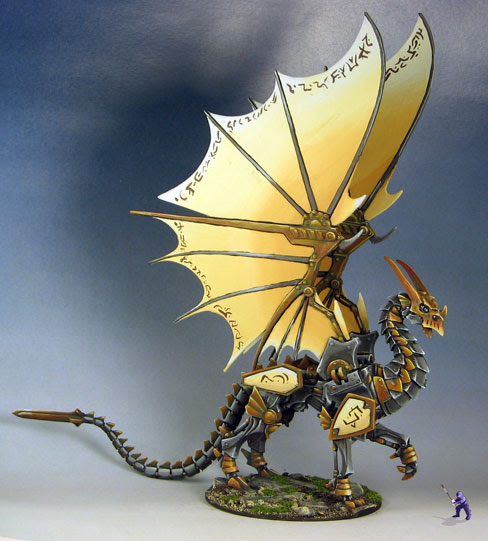 Here is a group that I got to paint up recently. The concept for this project was to do them all in a greyscale except with just a touch of color (kind of like Sin City).

I found that this technique gives me a massive amount of control over centers of interest. Simply adding the saturation to one area brings it out to the eye. It also made me consider where to put what colors (I made sure that the Inquisitor himself had the most green on him, and that none of them had too much green in places that aren't central).

This is an Ordo Xenos inquisitor along with his trusted retinue. 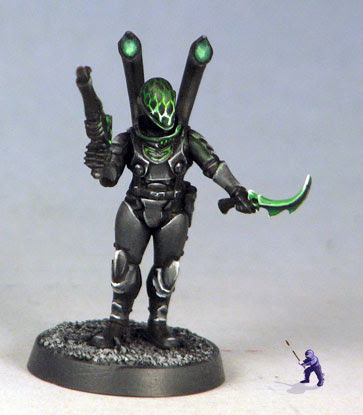 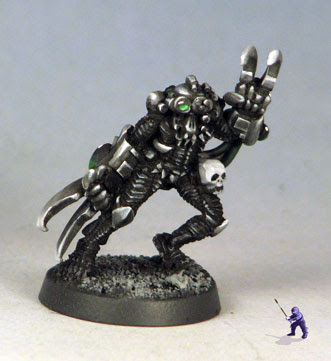 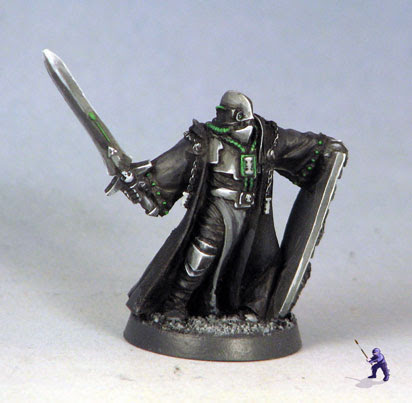 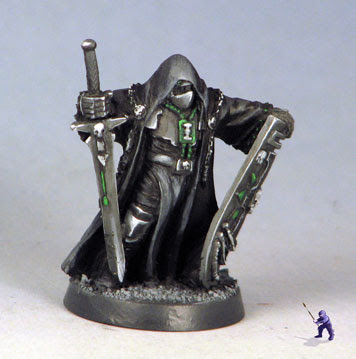 Warrior of the Sun (male)

Here is the second in the set of Warriors of the Sun. This time it is the male counterpart.

I went with a fairly bright color pallet here, and again used some starscape effects on his clothing to give him a sort of Shadow Dancer feel.
I was also quite happy to be able to do a light source effect on the lanterns that he keeps at his belt.